As an artist, it’s likely to get your work stolen, especially if you are very active online. The more exposure you have, the more likely it is that someone might take your work without permission and use it for just about anything – from editing it into banners and e-cards, to creating actual products for sale (like toys, t-shirts and so on). Many times you might not even find out about it. I’ve seen it happen to people I know and I hear about these situations every once in a while.  But this is the first time, that I know of, that a global brand gets involved in something like this. On Friday, Nestle posted on their official Facebook page, Nestea Venezuela, an edited illustration of artist Cristiano Siqueira, without his permission and without any mention of the author. Moreover, Nestea edited the illustration to create an image with their logo and tagline on it, and the words “Felicidad es… Viernes” (in translation, Happiness is Friday). 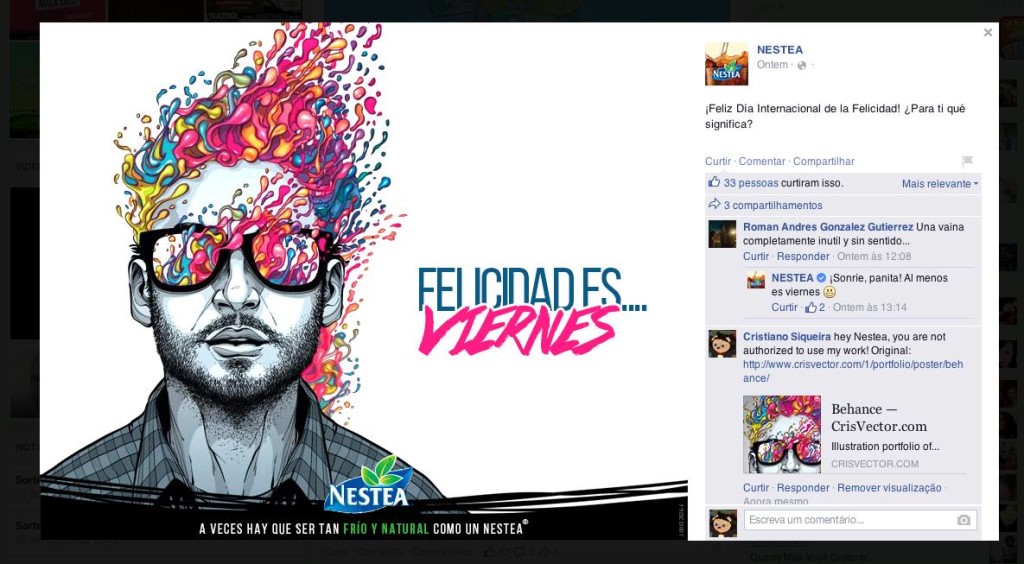 It’s such an amateurish attitude from the page management, since they are representing a global brand

A fellow illustrator saw their post and contacted Cristiano Siqueira to let him know that his work had been used without permission. Siqueira says he hadn’t been approached for permission request at any moment and that he would have been happy to negotiate the use of the illustration, had he been asked first. “I think it’s such an amateurish attitude from the page management, since they are representing a global brand”, says the artist who, as soon as seeing Nestea’s Facebook post, left a comment to inform them that they don’t have authorisation to use his illustration. Up until this moment, there has been no reply from Nestle Venezuela, although (surprise, surprise) the status has been erased, in the meantime.

That makes me think, if a global brand gets away with it, why shouldn’t everybody else?

I don’t get it. So, someone happens to create work you appreciate, enjoys doing it and makes it seem effortless, then posts it online for everyone to see. In what universe does that give you the right to decide you have to use it, for personal or commercial purposes, without asking that person first? What gives you the right to believe that you can just take something that isn’t yours and use it, for free, in any context you want, even though that’s someone else’s hard work?  Would you like it if some guy off the street sees the shoes you’re wearing, loves them, so he decides to take them off your feet because he wants to take them for a walk too? You wouldn’t like that? Then stop using people’s work without asking for their permission first. It’s the same thing. And the surprising part is that this isn’t an obscure small business we’re talking about, like the beauty saloon from across the street or a print shop that makes cheap t-shirts and mugs. This is a global brand who hired a social media agency that hasn’t got the simplest, most basic understanding of the way things work. And who shouldn’t get away with something like this, otherwise a significant precedent will be created. You know, the kind of “If Nestle did it, why shouldn’t we?”.