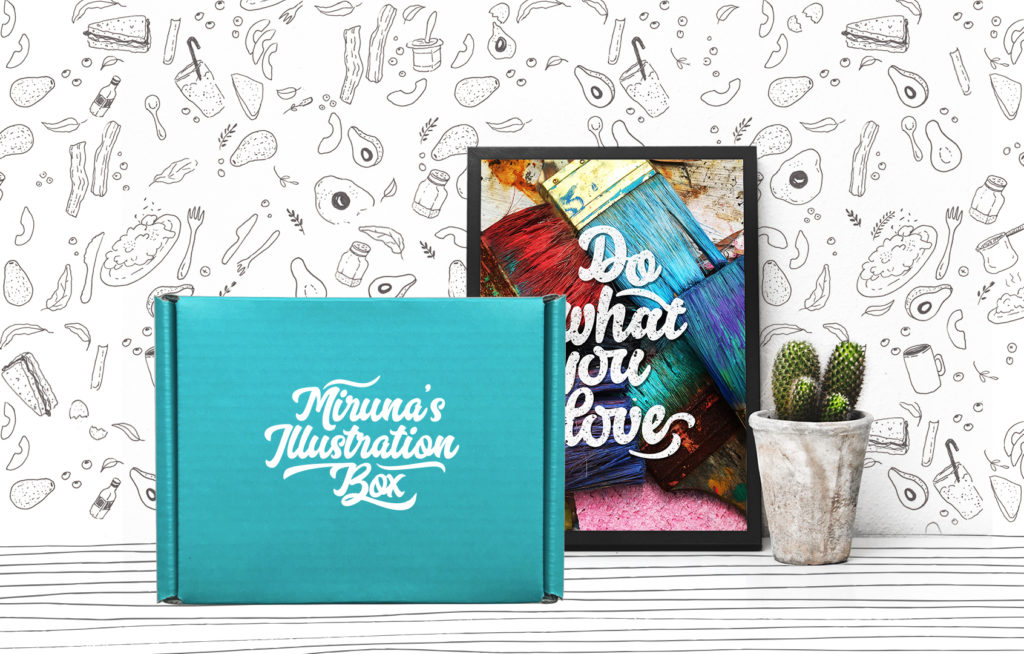 Earlier this year I’ve decided that I want to start my own business, doing illustration. The first step I took was starting a subscription box of physical products that I designed and produced myself and that I would mail to my subscribers, on a monthly basis. Now, almost six months later, I am closing down this project. I am still going to focus on my illustration business, just with a different approach.

In this article I’m explaining:

• why I decided that the subscription business wasn’t for me

• and what are the lessons I’ve learned from this journey.

What my goal was when I started this project

Just to give you some context, I’ve been working as a freelance graphic designer and illustrator for the past 5 years. In this time, I’ve had a lot of experience with working with clients and, although I always enjoyed my work, my goal was having my own shop and making a living out of selling my illustrations. In the past few years I’ve had a few attempts of making limited edition prints and selling them to my community, which worked out pretty great. People enjoyed them and that gave me the motivation to take it to the next level. 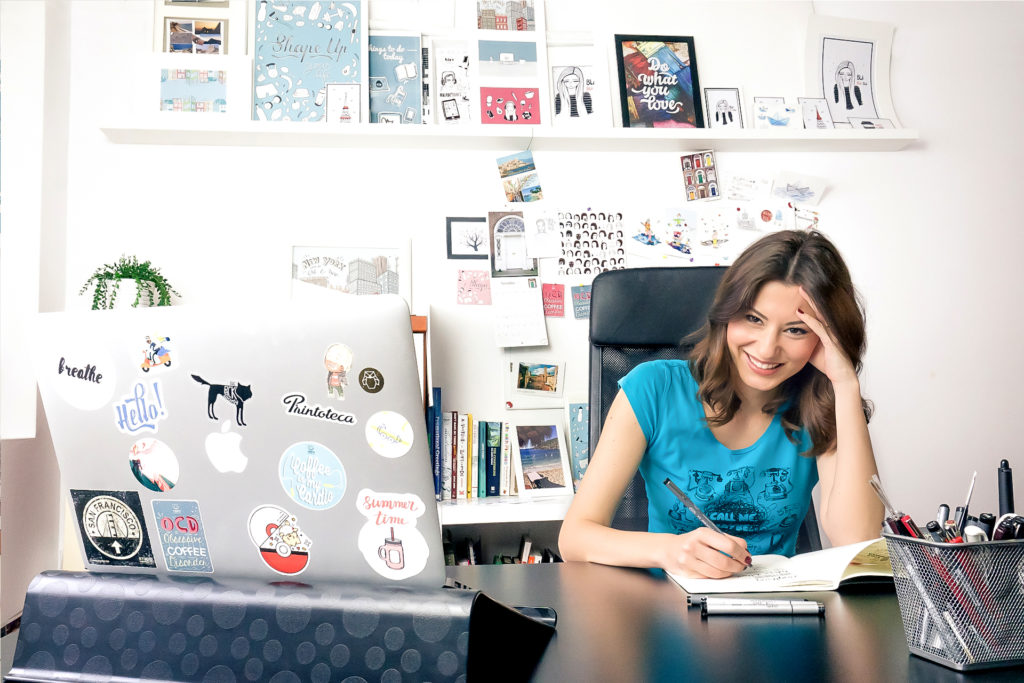 So earlier this year I had the idea of starting a subscription box based on my artwork.

If you’ve never heard of a subscription box, it’s a business model where people subscribe to your selection of products and receive them on a monthly basis. Once you start reading about this, you find that here are many businesses that do this, selling things like beauty products, foods, sweets, clothing and so on. Some even sell artwork.

And that’s how I started Miruna’s Illustration Box, a monthly surprise box filled with my illustrated products – from framed illustrations to greeting cards, stickers and other creative goodies. Something new and exciting each month. 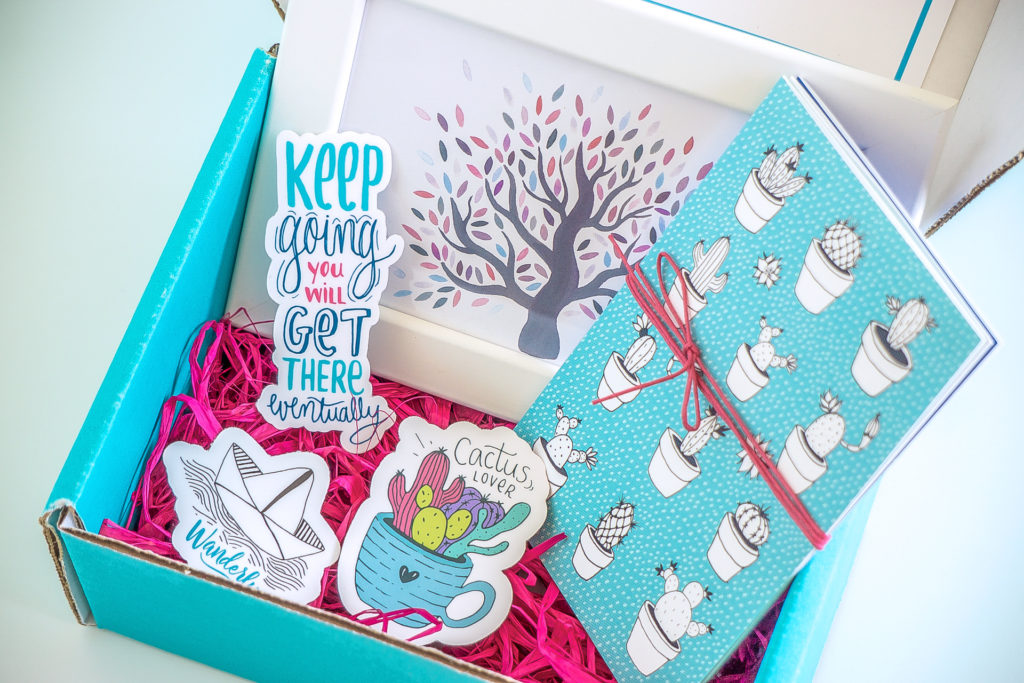 The journey of launching my first product

I started working on this project sometime in February and, two hard-working months later, I launched it.

In these first two months, I came up with what the product should be, I researched and tested a few suppliers (like where to print, where to get all the packaging from, all this stuff), came up with a name and a logo, created a website, wrote the copy, started a subscribers email list, designed mockups of the products inside the box (in order to showcase them on the website) and made a rough estimation of my numbers.

In April, I launched Miruna’s Illustration Box with the price of $19.99. The price was based on my initial plans of what should be in the box, versus what other similar boxes were priced.

I got my first monthly subscribers and the first feedback was amazing. I was really happy about the products too, I had worked my butt off to have top quality paper and prints, sexy packaging and I probably would have gotten an A in attention to detail (I know I’d probably make a good product person, but somehow I’m not sure that’s a great help in doing business). ?

After putting all my costs on paper – the quality prints, the frame, the super cool laminated stickers, the gorgeous turquoise box, tissue paper, fillings, envelopes, the shipping (which yeah, I offered for free although it cost about 30% of my total price), the website and the commission from the payment platform, my profit was… zero. To be exact, I was losing just shy of $1 for each box I shipped.

So I raised the price to $29.99 starting my second month, while temporarily keeping the same lower price for my previous subscribers (hey, gotta reward loyalty) ? 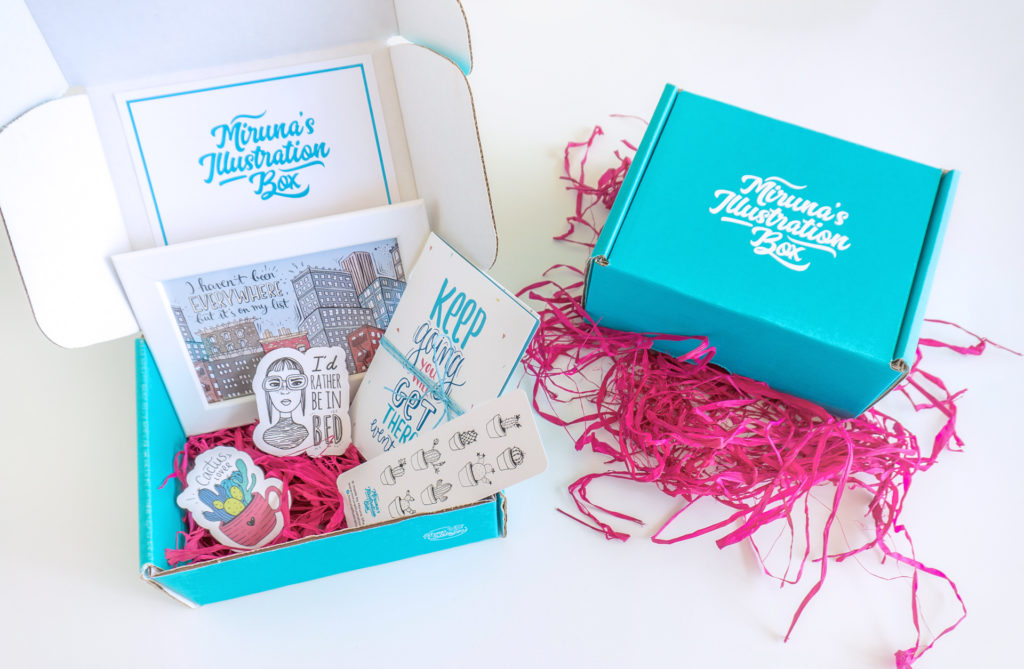 Meanwhile, I kept working on improving what was inside the box, coming up with new ideas for new illustrations and implementing them. I also took the time to get some professional shots made, which I uploaded to the website and social media, which helped somewhat to bring in some new customers.

I also spent time constantly updating the website, updating social media, making some promotional videos, showing “next month’s sneak peek products” and basically everything that comes along with changing your products monthly.

I also tried to do good customer service, keeping my paying subscribers posted with whatever was going on and quickly solving any problems that came up (at some point, someone got their box 3 weeks later than supposed to, because of post office malfunctions – and I had to replace it; someone else got a defective sticker and I had to also replace that, personally). This took more time than anticipated and took up a lot of my energy too. 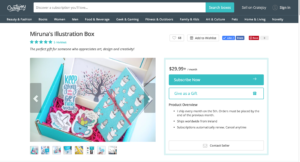 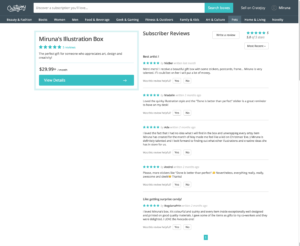 So why am I closing down the project?

Well, there’s a number of reasons.

For one thing, I realized it’s a bigger commitment that I initially thought. I know, it may seem obvious, after all any business is a commitment, especially when you’re dealing with physical products, but things did seem simpler before I started. And, although I thought I could do it for a few hours a week, it simply ended up taking too much of my time.

Also, I travel quite often and dealing with physical products and shipments on a monthly basis requires being in one place most of the time. I knew that already, but I thought I could make it work. And I probably could have, if that was my only issue. 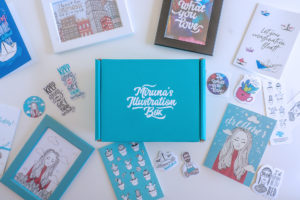 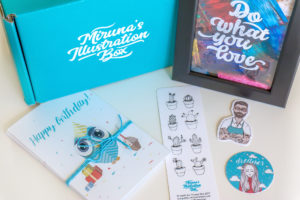 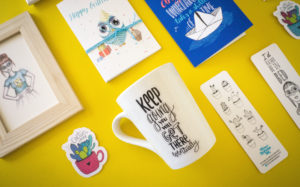 Dealing with suppliers can be a nightmare

Dealing with suppliers’ screw ups can be really frustrating and energy draining.

When your business depends on suppliers (in my case, the print shops and the box suppliers), you need someone you can trust, who respects your business and can deliver on time. And some suppliers can be very unreliable and can mess up your timeline badly. That’s probably more likely to happen when you’re a small business and you’re not doing big orders for them, so they can screw up and don’t have much to lose.

At least when it’s for your own product. And especially when it’s art. Because you need to take the time to: research the potential market, identify your target audience, then see where they shop and what they like, then reach out to them. Meaning, starting to look for publications and “hubs” that can help you get more customers. Does that sound like fun to you? Then you would have been perfect for the job 🙂

Aside from it being a little ego shattering (evaluating your art objectively can do that sometimes), it’s also, you guessed… very time consuming. And very boring. Especially when your time should be spent creating.

…and that brings us to the most painful one of all…

Almost no time left for being creative

That’s right, I learned that having a business based on physical products doesn’t leave much time for creativity. 80% of the work is about stuff like finding (or switching) suppliers, ensuring the products are up to your standards, calculating costs, making spreadsheets, doing marketing, dealing with customers reviews, dealing with technical issues and so on. It’s a one-woman-show business and juggling everything ended up taking all of my time and energy.

And my favorite part of actually creating the artwork – which was the backbone of my entire business, got left behind. So much that I only created something new when I needed it, not when I felt like it. And that’s not how I want to roll 🙂

Moreover, I realized that having this type of business doesn’t even require that you create the artwork yourself. In fact, all the subscription boxes that sell illustrations are made by curators who sell other people’s work. And that’s probably why, because it’s not easy being a creative and doing business at the same time. 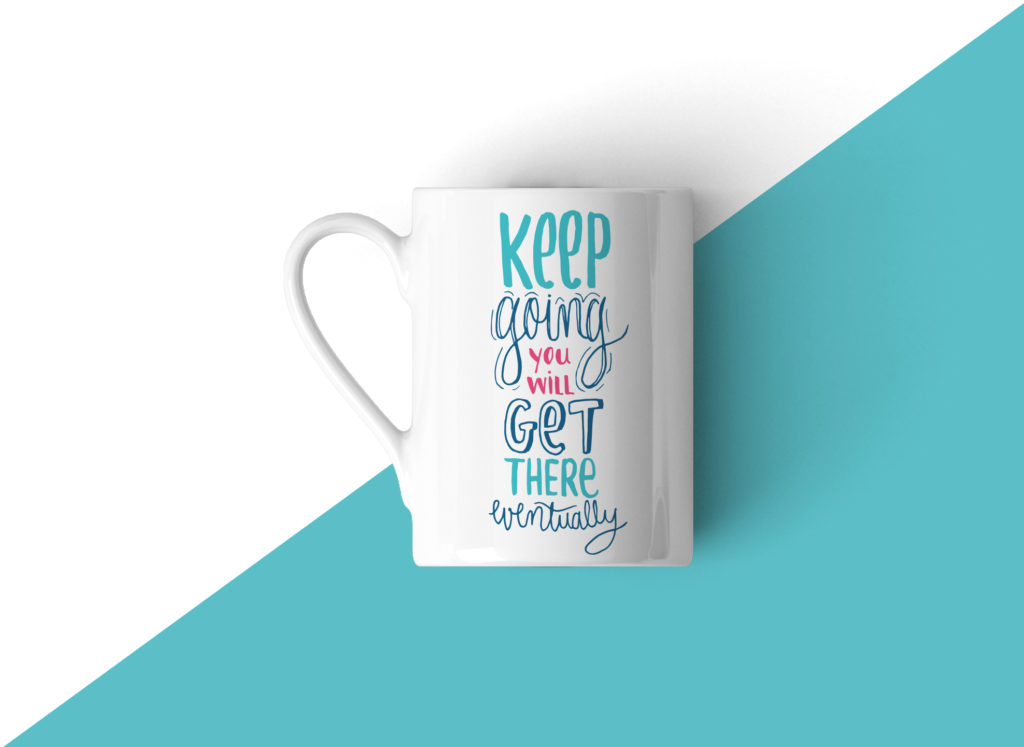 However, this was a success on a few levels…

• I found out what I want. This experience made me realize that I don’t actually like dealing with physical products. I’d much rather spend my time creating new illustrations and selling them on platforms like Redbubble, where they take care of all the logistics and shipping. Sure, I’ll probably make a limited-edition of prints every once in a while, but just for fun, nothing more.

• It was a great start towards building my business. I learned that a business requires more than being passionate about your product. I learned to put details in second place and first focus on getting things done. I learned how to make spreadsheets and calculate costs. I also learned that nothing ever goes according to plan (ha ha!) and you should always have a plan B. I also learned to move fast – if I get a new idea, either implement it fast or drop it; everytime I sleep too much on it, I lose momentum.

• I learned that I need to start small and grow from there. With this project, a mistake I made was jumping a few important stages. I didn’t allow myself to start small and be flexible. I didn’t start with a minimum viable product (like one basic product) and see what people think, test the waters, change it as I go. I started with a very clear set of products that I liked (and therefore assumed everyone would) and spent time coming up with a cool branding and expensive packaging. Rookie mistake, you’ll say, and you’re right. I got lost in researching what all the other successful subscription boxes were doing and tried to be Birchbox, from the very first month. Which was a huge setback, because there was no room left to go back from there. I learned that it’s easier (and smarter) to start small and build up, than the other way ‘round.

• I got to test out a few ideas and see what people like about my artwork. Since this is the first time I would actually sell my work directly to people (not to my clients, as I was used to), I got to see how people “label” my work. What they like, what they don’t. And it always, always surprises me. The most efortless illustrations seem to be most successful, while those I spent lots of time on are the least favorite. It’s fun to notice this kind of feedback.

I still want to have my own shop, that hasn’t changed, and I also want to take my time to focus on creating art. So for the next few months I’m going to upload my illustrations on shops like Redbubble (and probably others as well, in time) and let them deal with shipping and whatnot ?  I know that their products are good quality, since I ordered a few myself, and they have a great variety, from framed prints to t-shirts and hoodies, tote bags, coffee mugs and so much more. Even bed linen. It’s a pretty cool platform and I’m looking forward to see how that goes.

So guys and gals, if you like my illustrations and are looking to order something for yourself in the future, this is where I’ll be:  Miruna Illustration

Leave your mark on the Wall of Wally