For the non-Romanian readers of this blog, it’s the day before the elections for president here. So I’ve taken the time to tell you about a very cool project, that happens to be part of the presidential campaign of one of the candidates. No, I haven’t started doing politics – nor will I, but since everything related to illustration is my business, there we go.

Four weeks ago, Romanian illustrator & graphic designer Paula Rusu initiated a very cool Facebook cover-campaign, one that went viral in a very short period of time. She did an illustration of presidential candidate Monica Macovei, alongside of a custom-designed portrait of everyone interested in supporting the candidate, and turned them into free individual Facebook covers. So far, more than 1000 covers were made.

I was overwhelmed with the extremely positive feedback

How did this start?

“I was already a volunteer in the Macovei campaign and I had already designed the main Macovei character plus twenty other icons for the website. Then, this one night while I was trying to fall asleep, this cover idea came up. I figured it would be the perfect answer for the everlasting “what’s in it for me?” question. If you would be willing to display a Monica Macovei support message on your cover, I would make a cute illustration of you supporting her. So basically before actually starting the project, I designed a cover for myself and posted it to one of the Facebook groups destined for the campaign and shared the idea and everybody loved it. So I went on with it and posted the message and was overwhelmed with the extremely positive feedback”, Paula says. 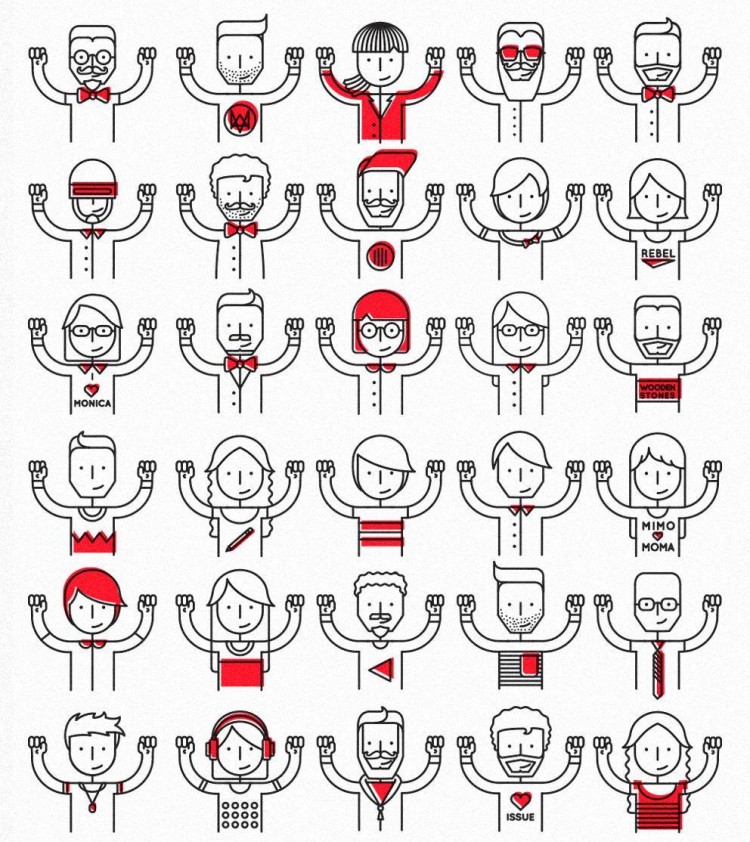 In just two weeks, she had personally hand designed about 120 characters, with 20-30 minutes spent on each. “The first thing I would do is check out the Facebook profile of whoever I had to design next. I’d note how their hair was, if they wore glasses or not, or if they had something specific and simple enough to put on their t-shirt”.

In the meantime, since the idea was starting to pick up (and take up a lot of time, as well), Paula teamed up with a programmer and they launched a Facebook app that would turn this into a system, allowing people to do their own custom covers and profile pics. She designed individual elements, such as various types of t-shirt, hair, accessories, glasses etc, that they uploaded as png files, and everyone could create their own character, download the image and use it on their profile.

I was curious about her expectations regarding this project, that she’s put so much time and effort in, and not in political terms, but in terms of her career, as an artist.

“I really didn’t think about the effects of this initiative when I started it. I just thought it was a cool project and that it would be very fun to work on. Like I previously said, I was extremely overwhelmed with all the positive feedback I got from people, as I didn’t expect it to get as big as it got. I’m very glad I had the opportunity to illustrate for a presidential campaign as I believe it’s not something you get to stumble upon too often. This alone would be enough to make me happy at this point. Whatever comes next, what can I say, bring it on”, she says.

Bring it on, then, and let’s see what she comes up with next, because I’m sure it’s gonna be something pretty cool! 🙂