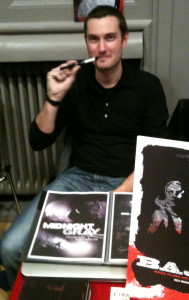 When you see Nathan St John’s gorgeous Paris illustrations, you can almost imagine yourself there. He manages to surprise so well that urban vibe, that familiar atmosphere you find in many of Europe’s big cities, that you can almost be sure that he is not from there. Because those who are are usually so used to the city, that they hardly notice all the little things that make up its charm.

And if you think that, you are right: Nathan St John is an American illustrator and conceptual artist living in Paris.

He has a master’s degree in architecture from Yale and has spent the last ten years in London and New York, designing buildings. However, illustration was always a passion that he kept improving, up to the point when he managed to turn it into a full time job. He is now a freelance illustrator working on commissions of print and digital media including branding, promotional images, book covers and graphic novels. He agreed to do an interview with me and talk about his work with clients, his skills in illustration and the secrets to being able to come up with a good concept, for a certain project.

I’ve always wanted to live in Paris, so I’m enjoying making an illustrated journal of my first year here

You are an American freelance illustrator based in Paris. Why Paris?

I’m originally from Illinois, but for college and work I’ve moved fairly regularly since then, with stops in Chicago, Boston, Phoenix, London and New York. My wife is French, so after a couple very fun but hectic years in Manhattan we decided life in France made more sense for the long term.

How long have you been living in Paris?

I moved here last year, so it has been an interesting 6 months of acclimation, to say the least! Coming from New York it feels much more like a big village, but with a tremendous cultural and arts scene. I’ve always wanted to live in Paris, so I’m enjoying making an illustrated journal of my first year here. New journal sketches turn up on my blog from time to time, and I like how they are beginning to track the seasons in Paris.

As a freelancer, I find that projects vary from US comic book publishers to French start-up companies 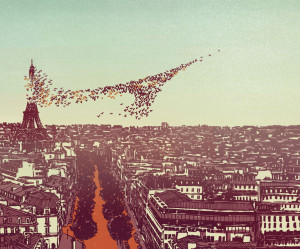 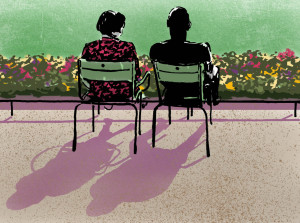 What is it like to be a freelance artist, for you? What opportunities are there?

The industry these days is so globally connected that I still work with many of the same clients from the US. My agent, Erika Groeschel is based in New York, and I’m now getting to know the European market better through research and events in Paris. As a freelancer, I find that projects can vary widely from one to the next – ranging from US comic book publishers to French start-up companies. In a way that’s what keeps this industry so interesting, each week can bring a very different design problem to approach.

Has studying architecture influenced/helped your illustration in any way?

Absolutely. I have almost ten years of experience as a design architect – moonlighting as an illustrator along the way because I love drawing all sorts of things, not just buildings! I was fortunate to work for innovative firms like Foster + Partners in London and New York, where the design philosophy stressed the importance of each project’s underlying concept. The same thinking applies to visual arts like illustration – the strength of the artwork rests on a strong fundamental idea. Architecture has also helped me tremendously in terms of communication. Design – be it a building or layouts for a magazine – can be a very subjective and personal, so clearly communicating the design choices one makes is critical. 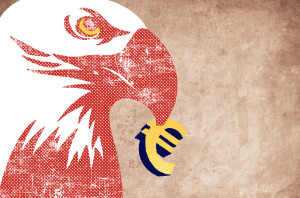 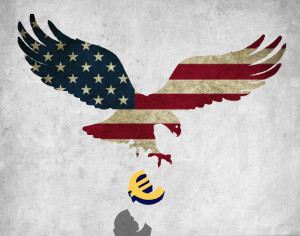 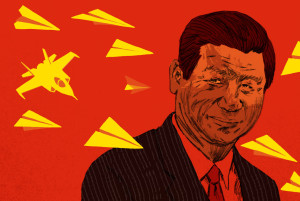 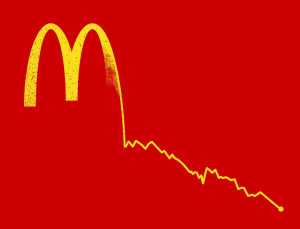 You create powerful illustrations, with satirical message. How do you get your inspiration?

Observation through personal experience and travel are important. I’m always taking photos, sketching and recording different colour combinations to see if they can come through later in my work. I have folders of sketch ideas, textures and colours that are important sources of inspiration when starting a new project.  I’m also an avid current events follower, so I’m always checking news and opinion sites on the web – I think there is tremendous inspiration to draw on from contemporary culture and world events alone.

The illustrations on your website – are those for commissions, or personal projects?

My website (and the associated work on Facebook, Behance and Tumblr) is a mix of commissions and personal projects. I like presenting personal work alongside commissions because it shows the topics I naturally gravitate towards and tracks my development as an illustrator. I feel both aspects are important to help art directors to get a sense of my abilities and approach. 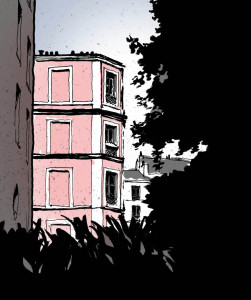 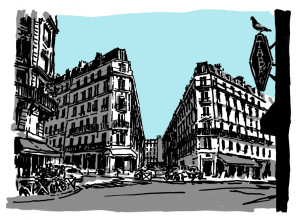 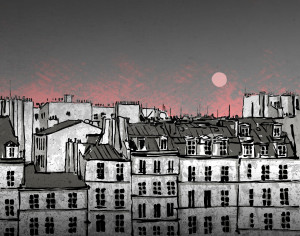 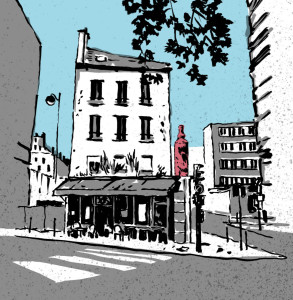 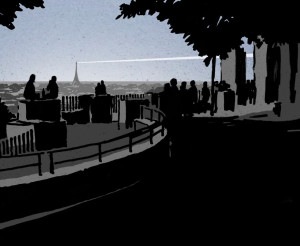 How do you manage to express a concept so well? Is it something that comes to you effortlessly (sometimes, at least), or do you work on each concept and go through various different concepts before deciding on a final one?

I wish the concepts all came effortlessly! Some ideas for projects do come easier than others. Others are more challenging, but can often end up being more rewarding as a result.  A recent commission for Variety was one that clicked nicely. The art director, Cheyne Gateley, had a great initial idea and my concept sketches really got the ball rolling. We had the usual back and forth on details, but the overall piece gelled very quickly. 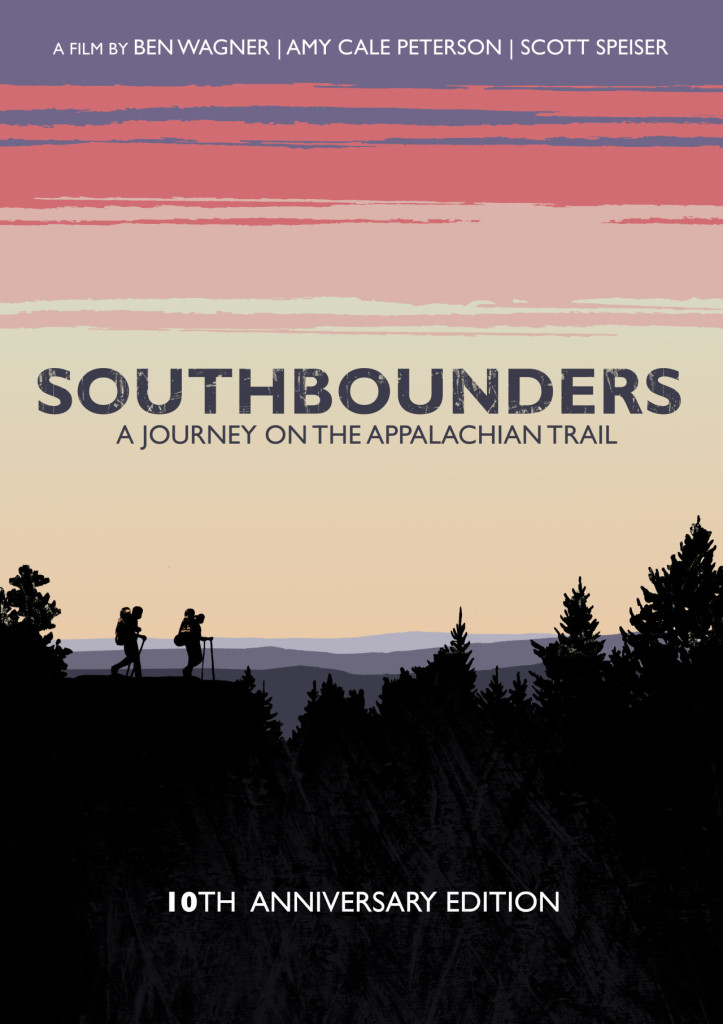 A more challenging commission was a recent poster commission I completed for film director Ben Wagner (for the 10th anniversary re-release of his film ‘Southbounders’). Working with some film stills from the movie, I tried a number of different layouts and ideas. Ben also had suggestions and very soon there were simply too many ideas competing for attention on the poster. At that point we realized we needed to take a step back and work via a process of reduction to develop a singular, powerful image for the poster. We are both very happy with the result, I think in no small part due to the hoops we went through to get there! 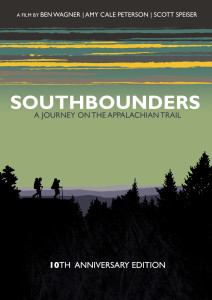 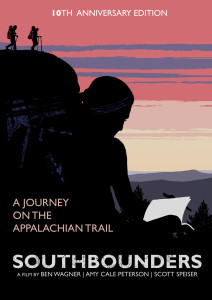 When a large number of creatives are involved, there can sometimes become too many options in play. The key is to generate consensus on the strongest idea and move forward on that

This is something that happens very often when trying to come up with one perfect concept: you get lost in too many possible approaches. Do you have any tips on how to “take a step back” and reduce everything to one idea? Especially when this is a team work, so it’s not just you?

Yes, I think when a large number of creatives are involved, there can sometimes become too many options in play. The key is to generate consensus on the strongest idea and move forward on that – though I know from experience that’s easier said than done. When I think a concept is looking watered down, I often try quick ways to really draw down on the message in the image – that can include simple tricks like increasing the scale of certain elements or cropping the image differently.

What technique do you use in your work?

The artwork is usually done with a combination of both traditional and digital techniques – starting with hand drawn concept sketches followed by tighter inks. Once the client and I are happy with the overall direction of the artwork, I take it into the computer to complement with line work with colouring, brushes and textures. I use a Wacom tablet for some of the digital work but still like to start everything with a pen and paper.

How long do you usually spend on a project (like the poster commission for Southbounders, for example)? From beginning to end?

It certainly varies on the number of illustrations involved and the complexity of the artwork. ‘Southbounders’ had a back and forth discussion going with the client for about ten days along with a series of progress sketches. The actual inking on the final piece was done in several hours. 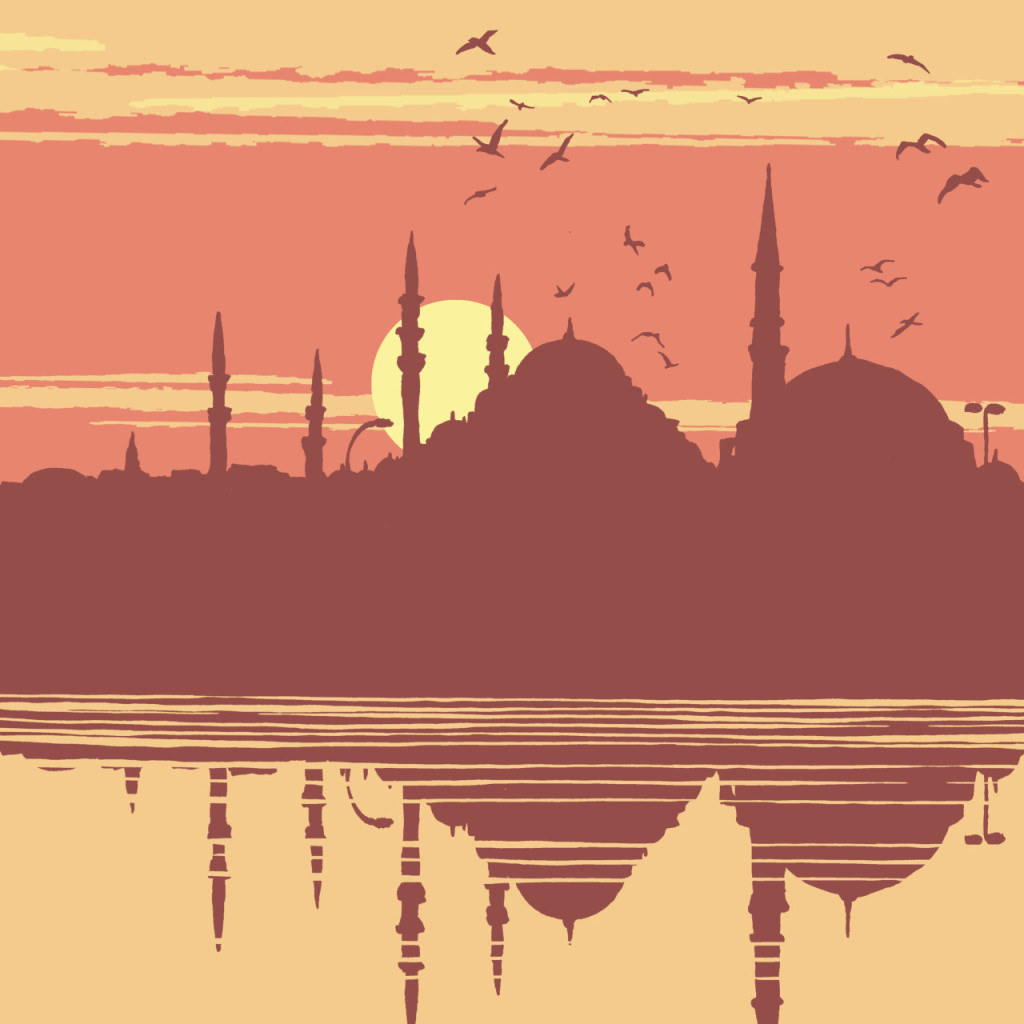 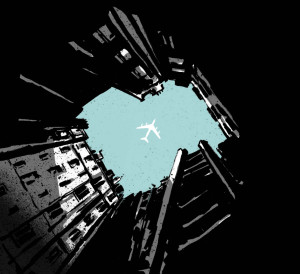 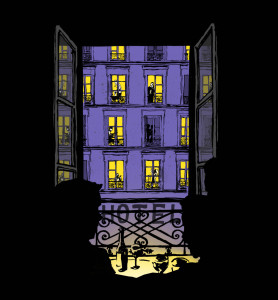 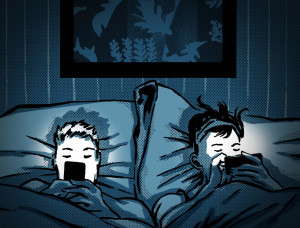 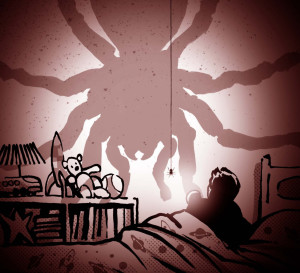 What would you say to someone who wants to become better at illustration? Any tips, advice, resources you could share?

Practice makes improvement… I suppose that advice follows the famous 10,000 hour rule.  Don’t underestimate what you can learn from personal work – I find that those personal studies can really open up a lot of new techniques and ideas. I also try to arrange my personal work around certain themes so there is a coherent focus to it. You aren’t sweating a deadline or worrying about how an art director will respond, so it’s a great opportunity to relax and follow your intuitive design moves.