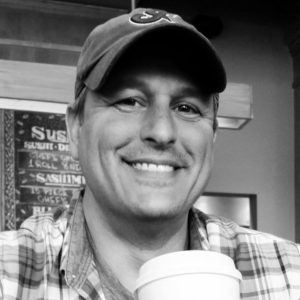 Josh Hara is known for turning into artwork something you’d normally throw into the trash: your paper coffee cup. Starting with the goal to draw 100 coffee cups, Josh Hara quickly became an Instagram star, popular for his #100CoffeeCups tag. But what was the motivation behind this project? How difficult is it to draw on a cup? Where does he gets his ideas from? Josh answered all these questions in this interview… and then some. 🙂

First of all, all the articles about you say you’re a coffee addict. Is that really so? 🙂

Depending on your definition of addict, I guess. I drink a few cups every day to keep my brain at peak performance levels. But if I lost my job would I start pawning possessions to keep my habit afloat? Yes, probably.

Well, my daily muse is a Starbucks Pike Place roast. But, when I’ve accumulated enough free drink points, my favorite caffeinated beverage is a Café Americano. 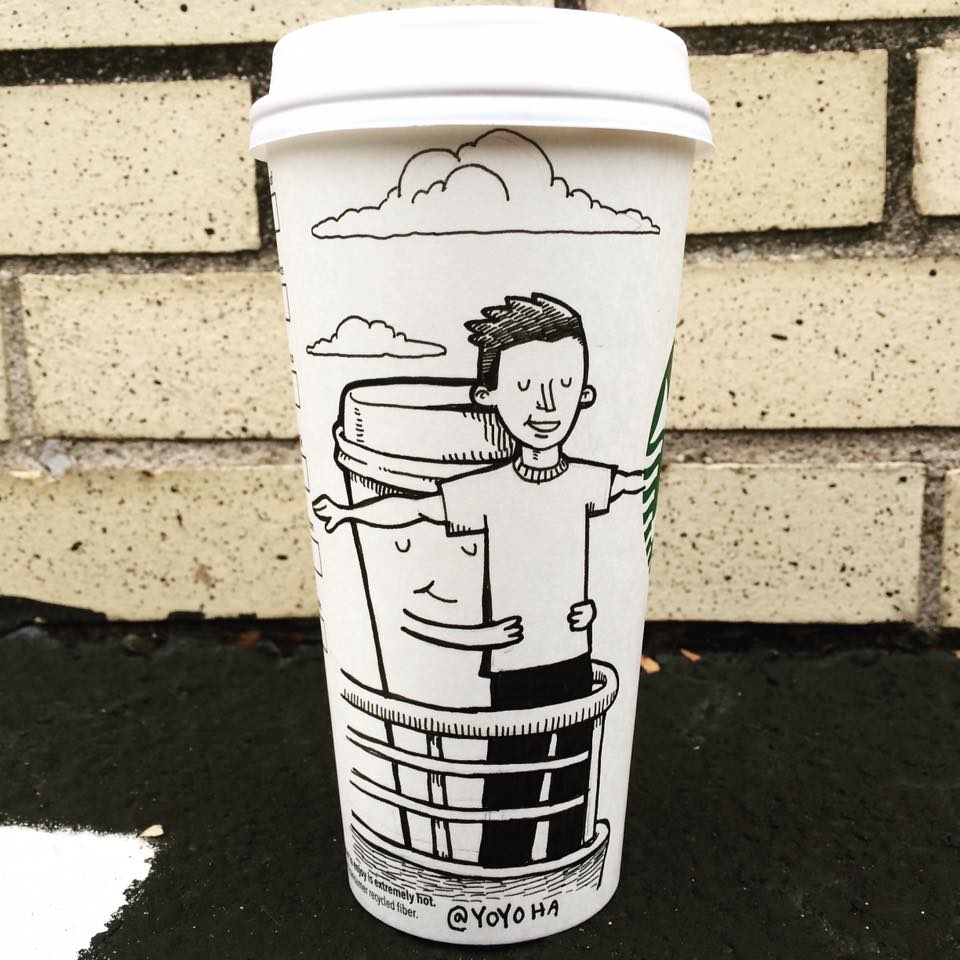 When did you draw your first coffee cup ever? What’s the story there, how did you get the idea?

If you look back at my Instagram feed, I had toyed with the idea a few times. But ultimately I had always admired the pristine surface of the Starbucks cup. It was smooth, perfectly white and just aching to be decorated.

So, one day I saw that Shia LaBeouf showed up at a red carpet event with a bag on his head that said “I AM NOT FAMOUS ANYMORE.” So, I promptly created my coffee cup version and posted it on Instagram. At the time it was more of a one-off, but a few days later I created another one and then another.

You started the #100coffeecups challenge about 3 years ago, is that correct? How long before your challenge caught on and became popular?

I started posting the first cups in March of 2014. Shortly afterward a friend from work came up with the hashtag #100CoffeeCups which gave me a goal to march toward.

Then, as I was nearing the finish line, my project got picked up by Mashable, then Buzzfeed, in the same weekend. After that, it caught fire and the story started popping up everywhere. I went from 8,000 Instagram followers to 40,000 that very first weekend. 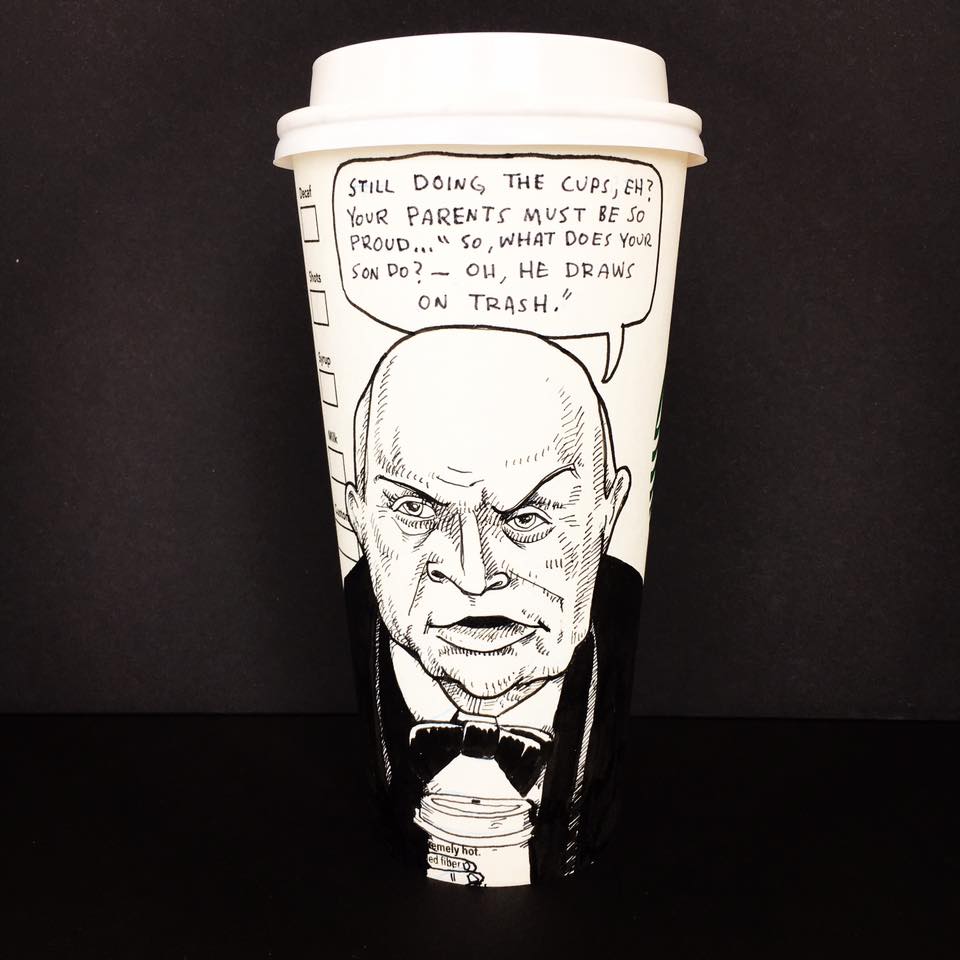 I know your goal was to reach 100 illustrated coffee cups, but that was years ago. What happened, did you get there? And what’s next now?

Yes, and then some. After I eclipsed 300 cups (earlier this year), I stopped counting. As far as what’s next, I am now starting to branch out a little bit with some new “flat” cartoons, but I will likely not stop doing the cups. They still seem to resonate with people and are a fun way to talk about things that are going on in the world, while we all collectively sip on that morning coffee.

What do you do with all the cups you’ve drawn? 🙂

Sadly, they are all stacked together in a storage tub in my basement. Thus, I spend most of my days hoping they don’t come to life like the toys in Toy Story and are sitting in there wondering when I might pay attention to them again. 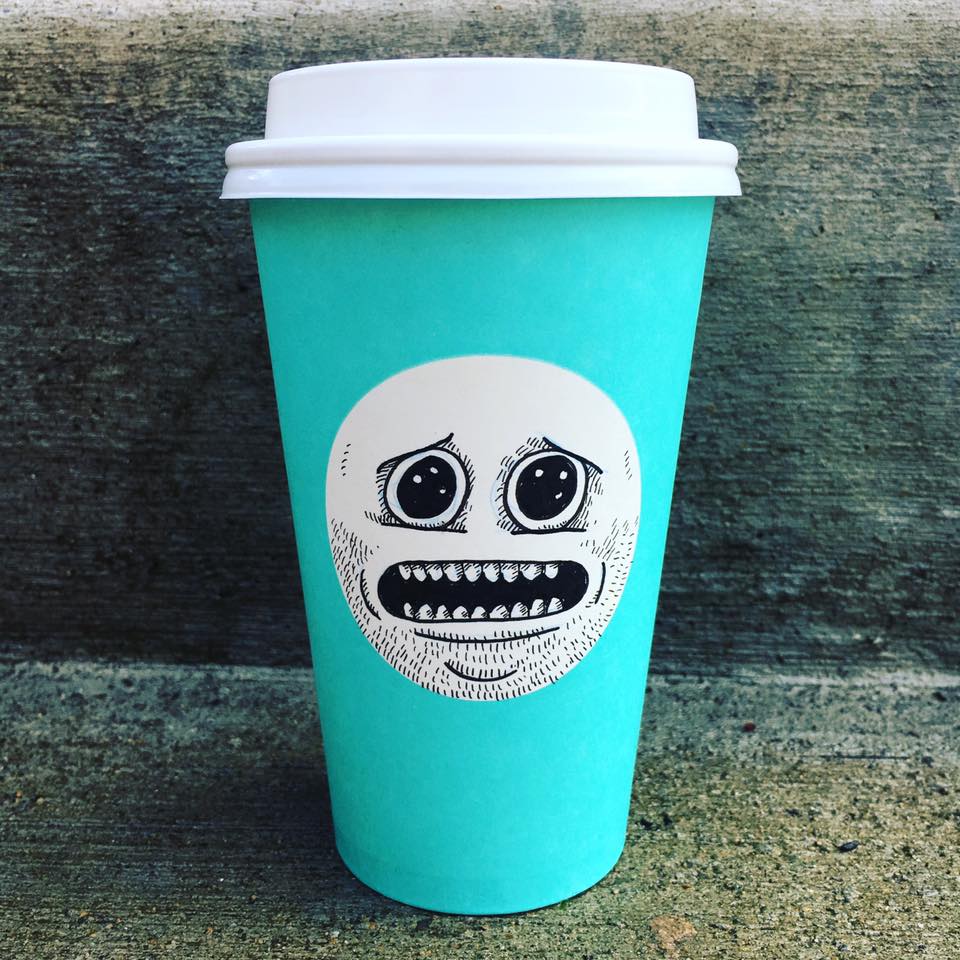 Has Starbucks acknowledged your work in any way, is there a partnership involved?

Nope. No partnership at all. I have communicated with a few of their social media managers once or twice, but that’s it. I’ve always assumed they like what I’m doing, but feel safer celebrating artists that are more ‘decorative’ in their approach to the cups.

I work in advertising, so this doesn’t surprise me at all, but I’d be lying if I didn’t want to do something for/with them at some point in the future. 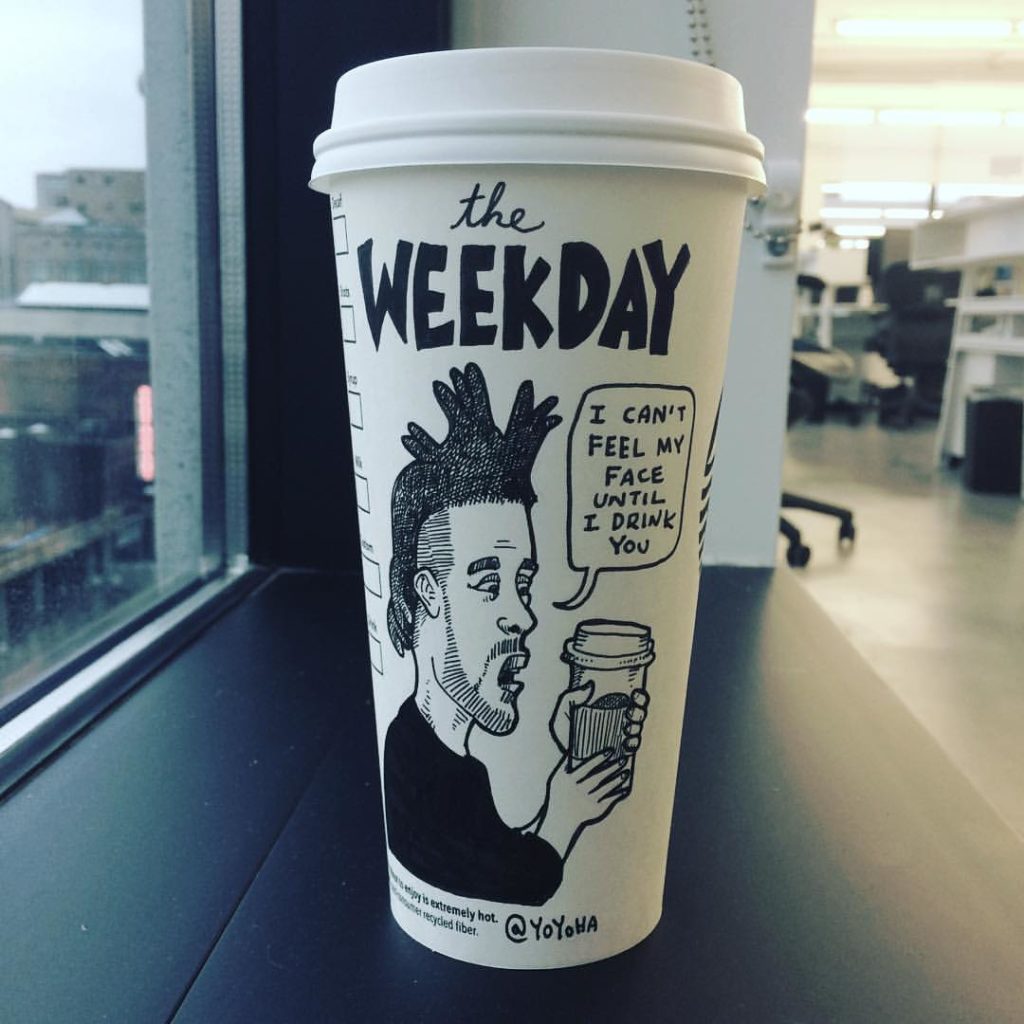 Will you ever get bored with coffee cups? If so, what’s next?

I don’t think I’ll ever totally walk away from them, but as I stated earlier, I’m starting to diversify the cartoons I am putting out there. Long form, short form, it’s a totally mixed bag. If I didn’t have a day job, I would be churning out tons of new stuff all the time… but alas… 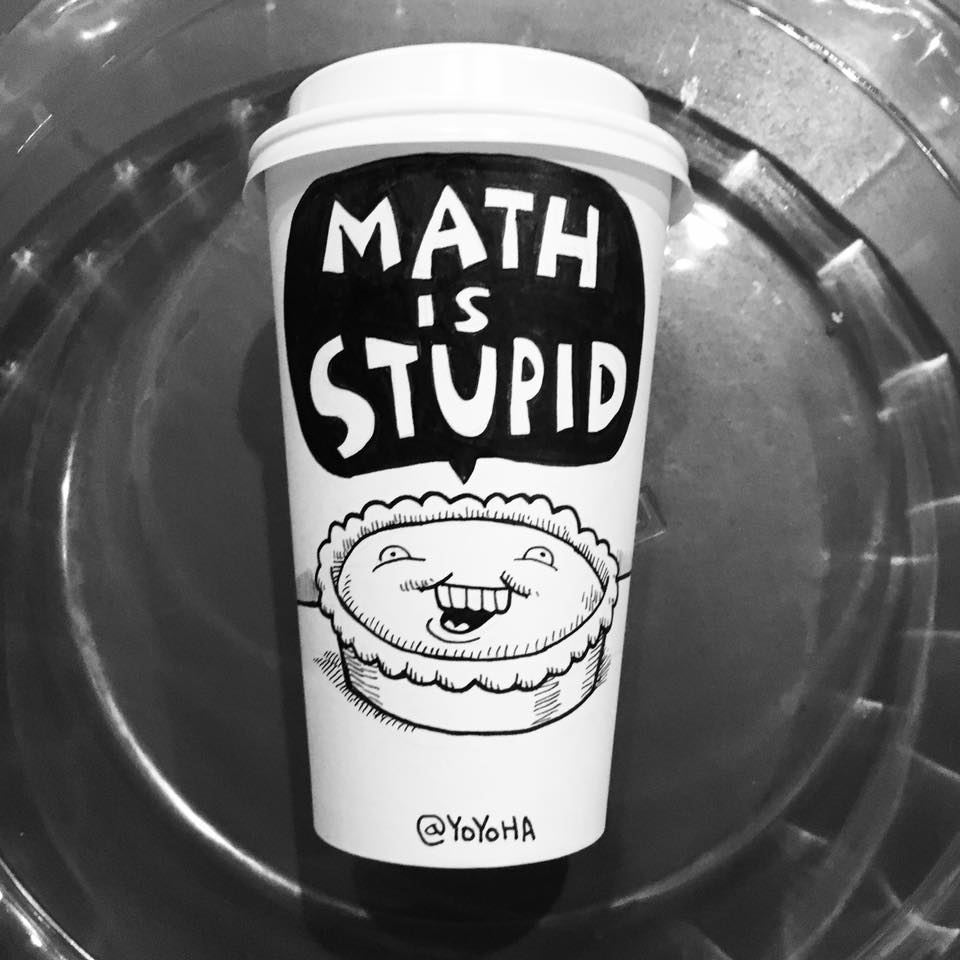 What do you think people enjoy the most about your work?

Honestly, I’m not 100% sure. My drawing style is always changing, that’s what prevented me from pursuing cartooning when I was younger – I never felt like I could draw the same characters over and over. So, maybe people are into the variety of ways I bring something funny to life?

What is your process when creating a new cup? (Do you keep a notebook around to write down new ideas? Do you take suggestions from your audience? Do you ever create a sketch beforehand?)

Totally depends. Most of the time, I will do a really rough sketch of an idea in a Moleskin, sketchbook or whatever scrap of paper is nearby. It helps to have an idea of what something could look like before I start on the cup itself. And not just the drawing, the writing too. 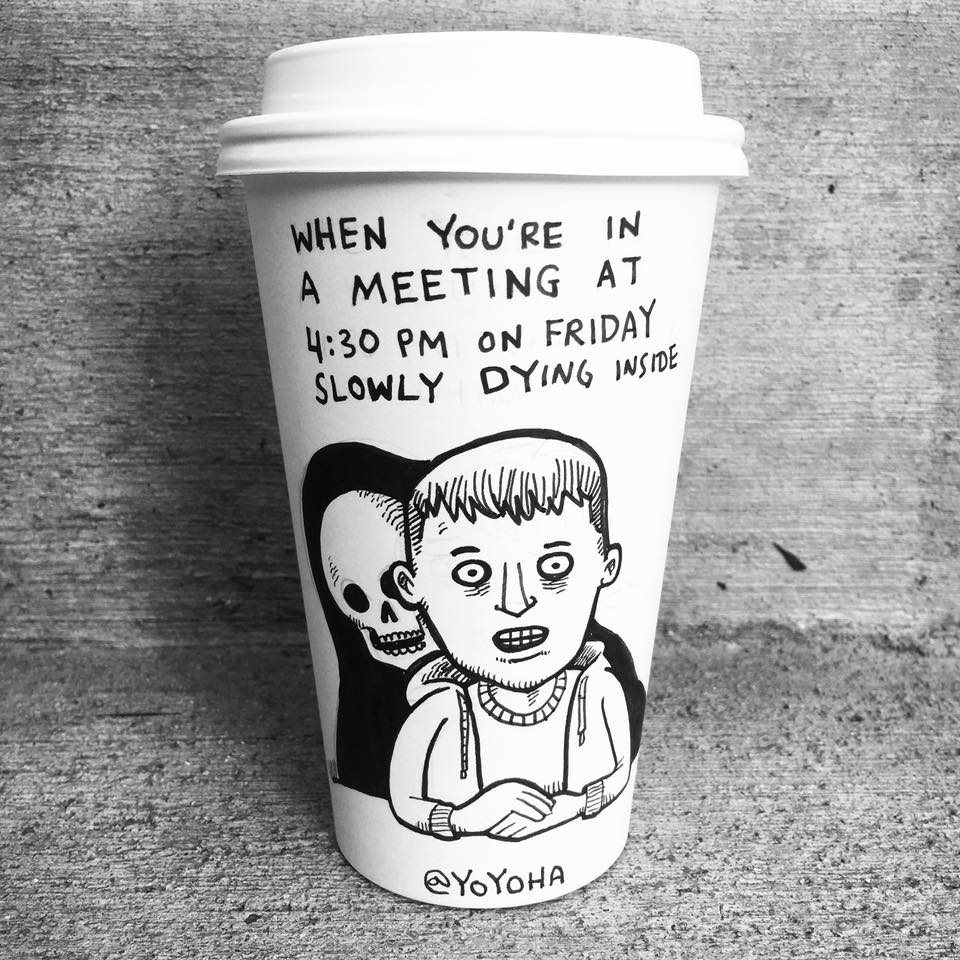 What was the most challenging coffee cup drawing you’ve done and why?

Good question. I’d say anything that features a drawing/portrait of a notable person – because getting a good likeness on paper can be tough, but on a cup, it’s that much harder.

I tried to doodle on a coffee cup once and it’s pretty uncomfortable, because of its round shape 🙂 Any tips?

Just remember to rotate it as you work. The mistakes happen most often when you move your hand instead of the cup.

Is there a way in which you can scan/photograph and reuse drawings from a coffee cup, for prints and such? If so, I’m curious how you do that.

Not that I know of. I created some travel mugs of my more popular cups on Society6 and I had to redraw them on a flat surface to make that happen.

What tools do you use to draw?

I used to use Pixma Microns, but recently switched to Faber-Castell PITT artist pens. 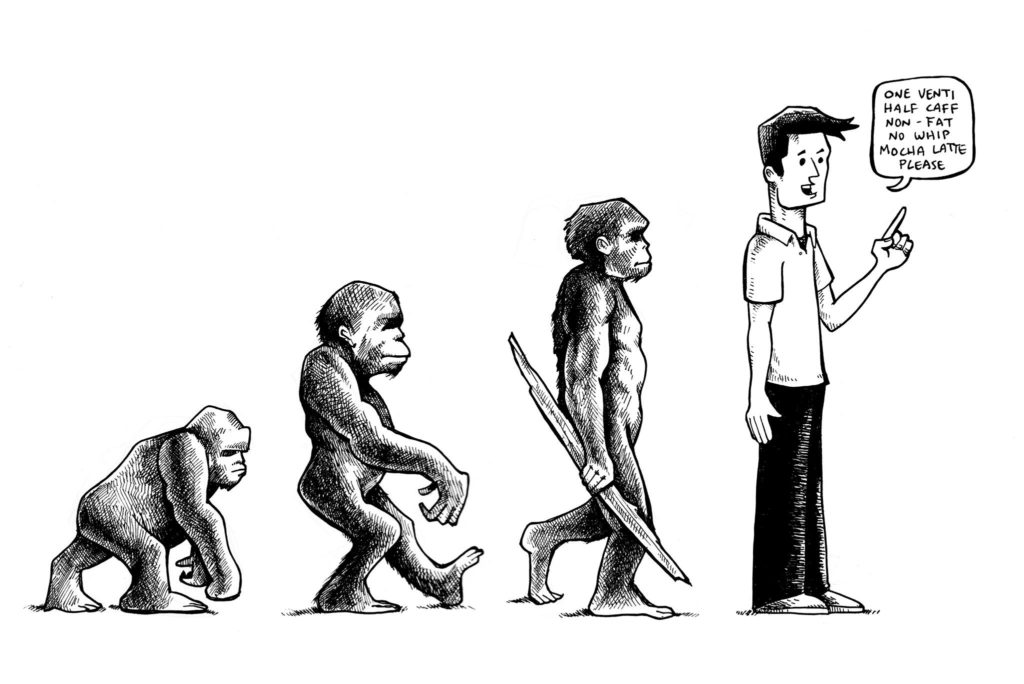 You’re close to reaching 100k followers on instagram, wow! In terms of promoting yourself, have you done anything else than just constantly creating relevant content and putting it out there? In other words, what’s your secret? 🙂

I think just posting things people like, comment on and share is the key. I also think that I would get to 100K faster if I posted more regularly. But overall, you just need to keep being a good follow. Adding value to people’s timelines by showing them something they haven’t seen before is always good practice.

You’re also an active Redditor. Has that helped with your popularity as an illustrator? If so, any tips there?

I absolutely love Reddit, but I wouldn’t (at least at this point) categorize myself as active. I’ve definitely had some success posting on Reddit, but it’s a tough place to succeed consistently (at least for me). I’ve seen some follow bumps when something I’ve done makes the front page, but for the most part, I believe that people kind of stick to appreciating you in the community they discover you in.

Speaking of money, do you monetize your work on coffee cups in any way, like sponsorships or selling the cups…?

I started a Society6 shop this year, but I’d say the money I make there is marginal at best. Occasionally, I will do a sponsored post on Instagram, which can be fun, and I have done a couple of commissions for friends.

The best thing you can do for an idea is continue to explore it. Find out what makes it special. If it’s good enough, it will lead you wherever it is meant to go

What are some (other) income streams that work for you, as an illustrator? I know you have a Society6 shop, is that working out for you? (I am asking because I know artists who have a hard time making money from selling their work and any experience you might share will be useful).

Well, I wish I had more advice for people on how to monetize their creativity, but because I have a career outside of the cartoons/cups, it’s hard for me to spend the time necessary to make something like this a viable second (or first) income.

My advice has always been: the best thing you can do for an idea is continue to explore it. Find out what makes it special. And if it’s good enough, it will lead you wherever it is meant to go. Creatively and/or financially. 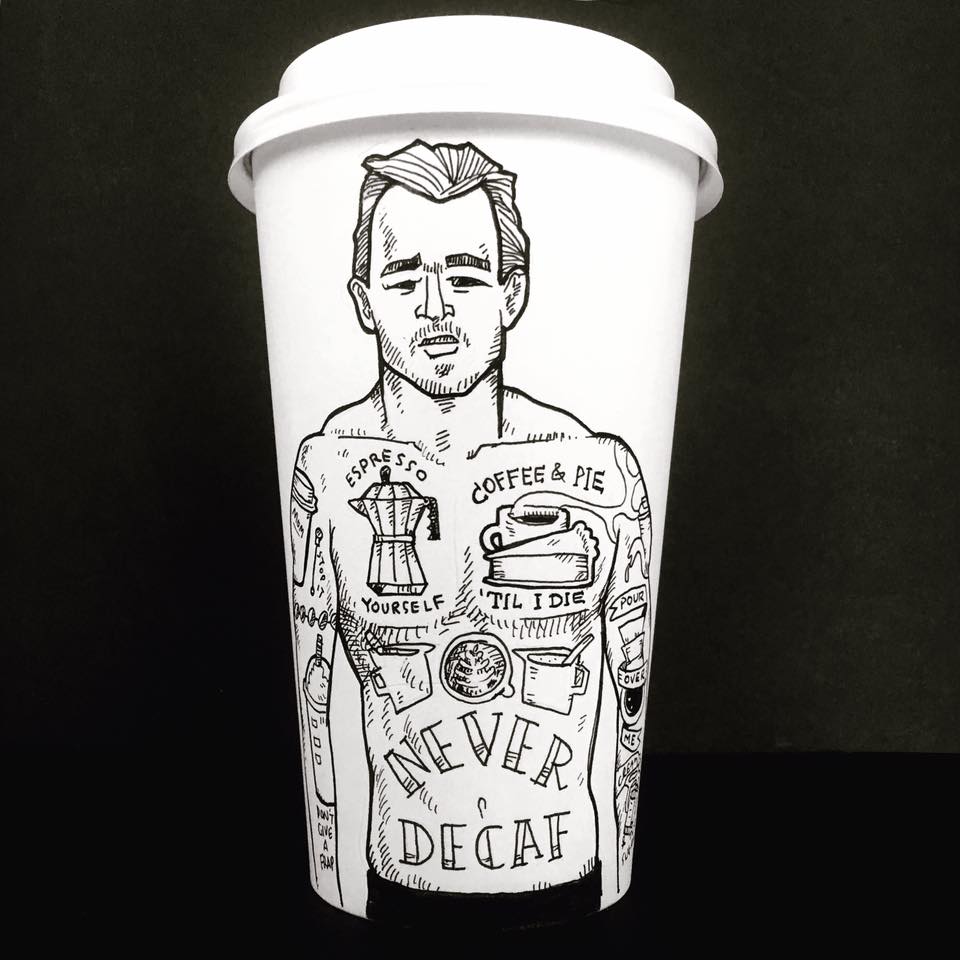 What does a day in your life look like?

Most often I wake, get my kids off to school and my wife off to work. Stop at Starbucks on my way into the office. Spend most of the day writing/making creative decisions for whatever fire’s currently raging and then get home, get kids off to sports practices, eat a family dinner whenever possible, then read Harry Potter with my 10yo., walk my dogs with my wife, so we can catch up on whatever is going on with each other and then I have a good two hours to work on whatever I like. Most often, I curl up into a ball and weep, but if I’m feeling particularly satisfied with life, I will knock out a cup.

It seems like you’re really really enjoying your work. Has this always been the case? What were you doing before drawing on coffee cups?

Well, I don’t really consider the cups “work” but yes, I absolutely love working on them. The fact is, I had always drawn cartoons, since I was a kid, and I had really given up on that after Twitter rolled into my life. It was just easier, faster to tweet out jokes than it was to draw them. But in the back of my mind, Twitter was always something of an idea sketchbook, funny thoughts I was gathering and could make cartoons out of if I ever found myself with the time. So, the entire cup project was really me finally having a way to work drawing cartoons back into my life.

Any advice for illustrators who aspire to making a living out of doing what they love?

Illustration is the fine art of commercial design. It’s not easy to succeed in this space, but if you love it enough, you will make time for it. If you make time for it, you will get better. And when you get better, people notice. So don’t give up. Just keep pushing yourself to make great things and sooner or later your audience will find you.