Connie Lim is a freelance fashion illustrator from Los Angeles, California, currently splitting her time between LA and London.  Eight years ago, while attending school, she started a project that would turn fashion illustrations into a set of playing cards. She started by creating a unique, hand-drawn illustration for each card, and continued throughout the years, working on new cards whenever she found the time. Her dream was finishing the entire deck, 54 unique cards, and being able to print them for people to use.

“Decked out: Fashion Playing Cards” – raising $11,000 and counting, on Kickstarter 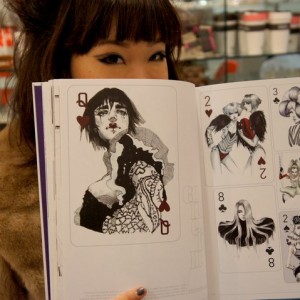 The exciting long-term project, which Connie describes as “A journey of my twenties”, has recently been crowd-funded through a Kickstarter campaign, with the goal of raising $10,000. The deck would then be printed out, wrapped into an elegant, metallic package and shipped out to the people who contributed to its developing. Now, with only three days to go before the end of the campaign (December, 23), the project has successfully reached over $11,000, which means that in 2014 you will be able to get your hands on the gorgeous set of cards, too!

Meanwhile, you still have the time to contribute on Kickstarter, here, but not before you hear the making-of story, which Connie agreed to tell for this Talk Illustration interview.

Fashion and Illustration: It was only natural to combine the two loves for me

How many years of experience do you have, as an artist? I started to work professionally around 6 years ago, but mainly freelance work. You have graduated two design universities (note: Art Center College of Design in Pasadena and Central Saint Martins College of Design in London) and chose to specialize in fashion. How did your studies help you evolve, as an artist, and develop your own style? I suppose it’s all the influences and interests you accumulate along the years. Universities generally expose you to many different genres and scenes, but I think more than that, it was the life experiences I had within this time (and being in London) that helped me develop as an artist. 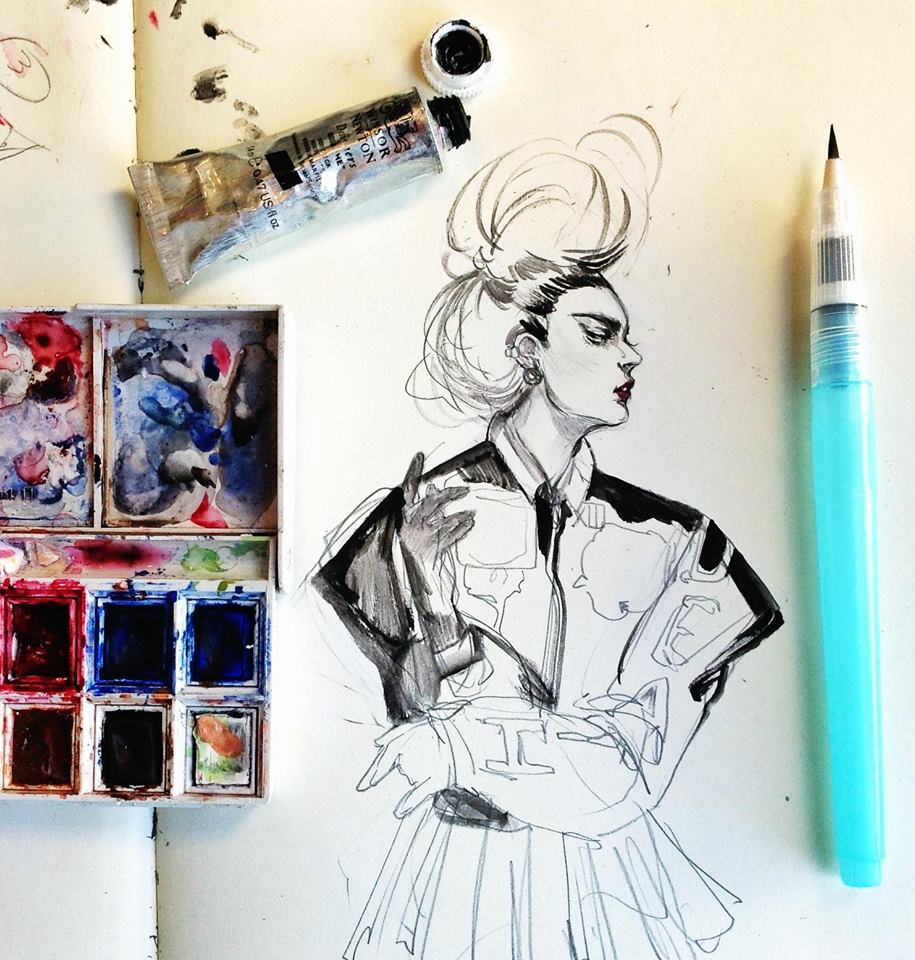 Is your drawing exclusively on paper, do you use digital tools, too? I am in love with traditional drawing! I always start on paper with a pencil but once I have the finished illustration, I use photoshop to touch it up but I try not to lose the ‘hand-touch.’ What are the tools you use, in creating your illustrations? I usually use micron pens, gouache black paint, watercolor and watercolor brushes. Those are the main ingredients. 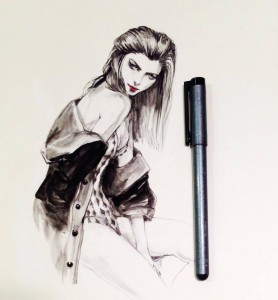 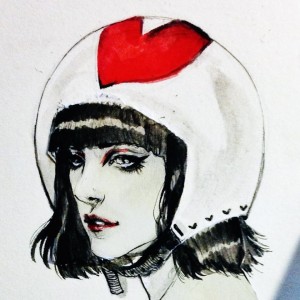 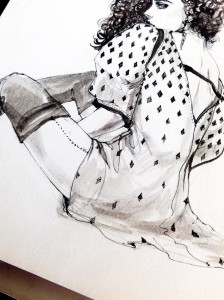 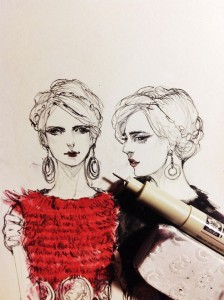 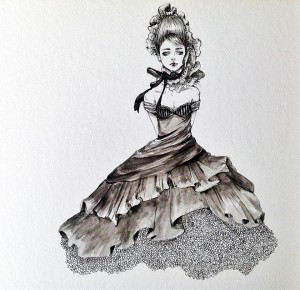 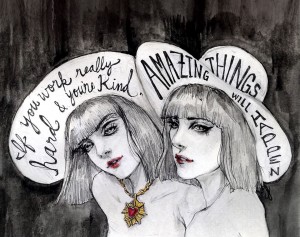 How important was it, for you, as a fashion illustrator, to understand fashion, with everything it envolves (materials, seams, styles, history etc)? Did you study this, was is a passion you followed, what was the learning process? It’s an important element in fashion to know how clothes are made. The more knowledge about garments, the more you can draw details and know proportion and placement. I studied 2 years pattern-making and draping in LA before heading off to St. Martins. I was definitely passionate about fashion but after some time I realized illustration was my forte. It was only natural to combine the two loves for me. 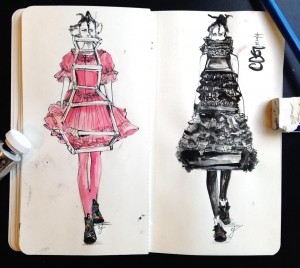 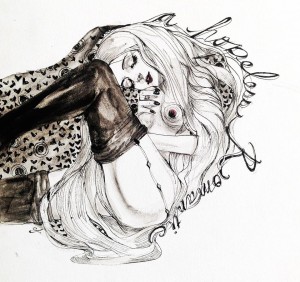 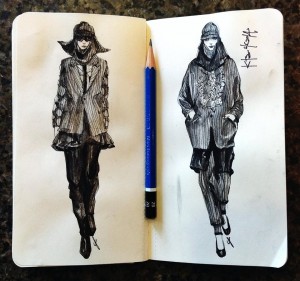 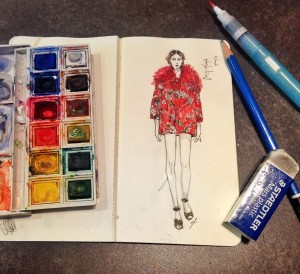 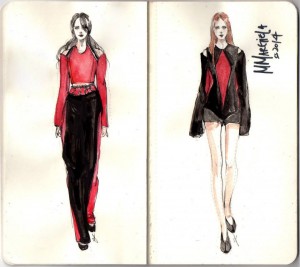 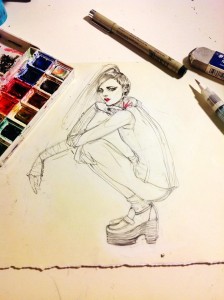 I had to finish University and worked in between so it was hard to constantly draw all the time. But I would squeeze in an illustration or two when I had the time. 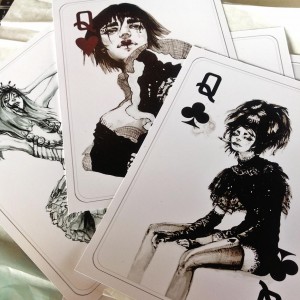 Tell me the story of what is probably your most well known project, “Decked out: Fashion Playing Cards”. How did it start, how did you get the idea of combining fashion and playing cards?

It was actually a project I started in my second term at Art Center. I took a fashion illustration class and fell in love. The cards were part of my final for the class, we had to choose a theme by Visionaire and I randomly chose The Deck of Cards, and till this day, I’m really glad I did!

How many years ago did you start the project? Did you work on it constantly, throughout the years?

I probably started about eight years ago. I drew the four Queens for the deck and thought one day I would like to finish it. I had to finish University and worked in between so it was hard to constantly draw all the time. But I would squeeze in an illustration or two when I had the time. But it was only till two months ago that I would really buckle down and finish what I started. This project is very special to me as it’s a journey of my twenties.

What inspired you – and what keeps inspiring you, in creating the beautiful ladies on each card?

There are so many things that inspire me, that it’s hard to narrow it down. It depends generally on my mood or what I encounter in everyday life. It can be a song, a quote, of course an image, or even a play. I’m very sensitive to emotions and when I feel strongly about a subject, I immediately have to draw it. 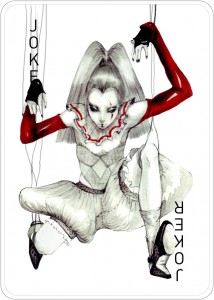 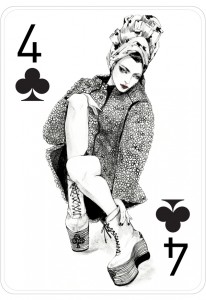 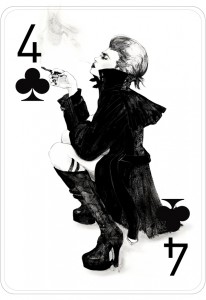 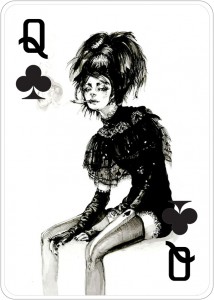 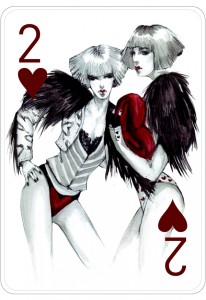 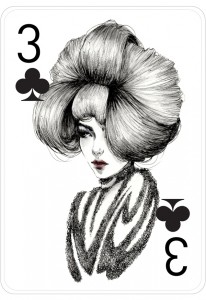 This project is very special to me as it’s a journey of my twenties.

Considering that the illustrations were made over the years, your style must have changed along with your gaining of experience. Do you see a difference, do you ever look back at the old card illustrations and feel like they are not ‘up to date’ with your current style?

I definitely see a big difference in terms of style and skill. And there are drawings I couldn’t stand so I had to redrew them, but most of the cards are the same. Certain drawings have sentimental value to me. It’s quite nice to look back at them and remember that period of my life.

Up until one point, the project was a personal initiative no one knew about. How did you decide to put it on Kickstarter and turn it into a campaign?

I always wanted to get them made into an actual deck and Kickstarter was a great platform to get your project out there and funded. It actually costs quite a lot to produce as you have to have a minimum amount of decks to print. It’s great because you don’t lose anything if you don’t get funded, so why not just try?

Now that the project has enough funding to be implemented, where will the people who want to order your deck of cards be able to order it?

For now it will be sold online, until I get a stock list. 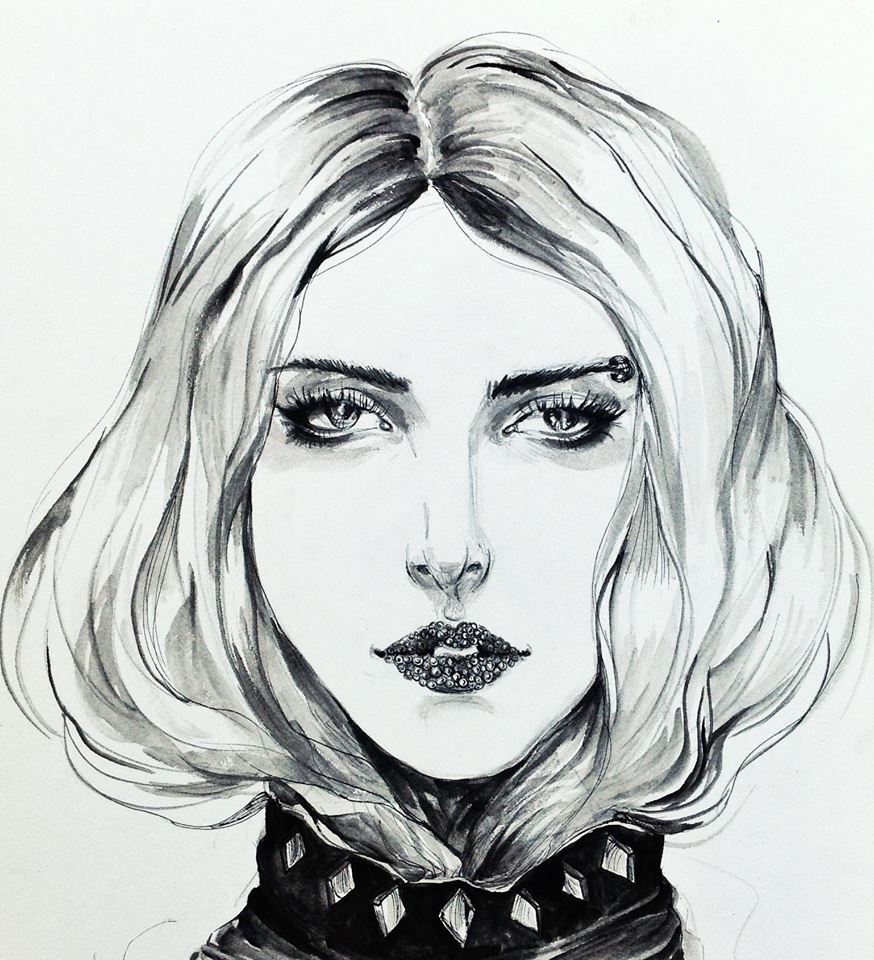 There are many fairly famous people I was inspired by, in creating the cards

You used model Brianna Olenslanger, for creating one of the cards in your deck [foto above]. What was the story there?

I met Brianna while drawing at connected fest in LA. She was very beautiful and I was attracted to her facial features. It was brief but I found her on instagram and found her pictures very provocative and innocent at the same time which I thought was interesting to depict.

Are there any other well-known people on your cards?

There are many people I was inspired on instagram who are fairly famous but I want the audience to guess without giving it away! 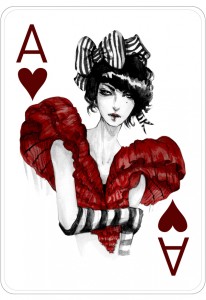 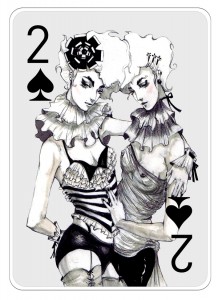 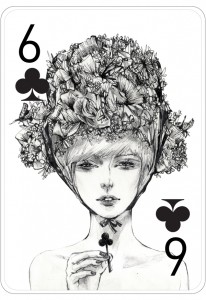 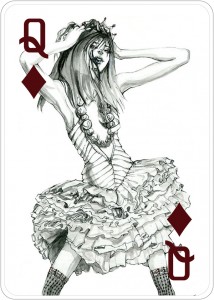 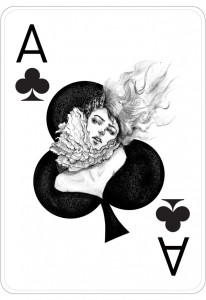 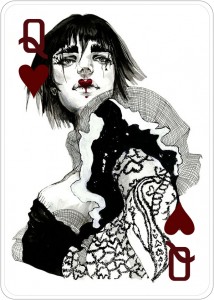 I hope to get a good response from the audience and hope they love the cards as much as I have, drawing them.

Where do you see this project going in the future, what do you dream will happen next?

I hope to get a good response from the audience and hope they love the cards as much as I have, drawing them. Ideally, I would like to stock them at world wide locations that highly regard design and art, that would be the dream!

After experiencing what creating 54 unique cards is like, are you feeling up to the task of creating a new concept for another deck, sometime in the future?

It’s something I would definitely consider in the future. Since I enjoy it, I don’t think it’s hard to start.